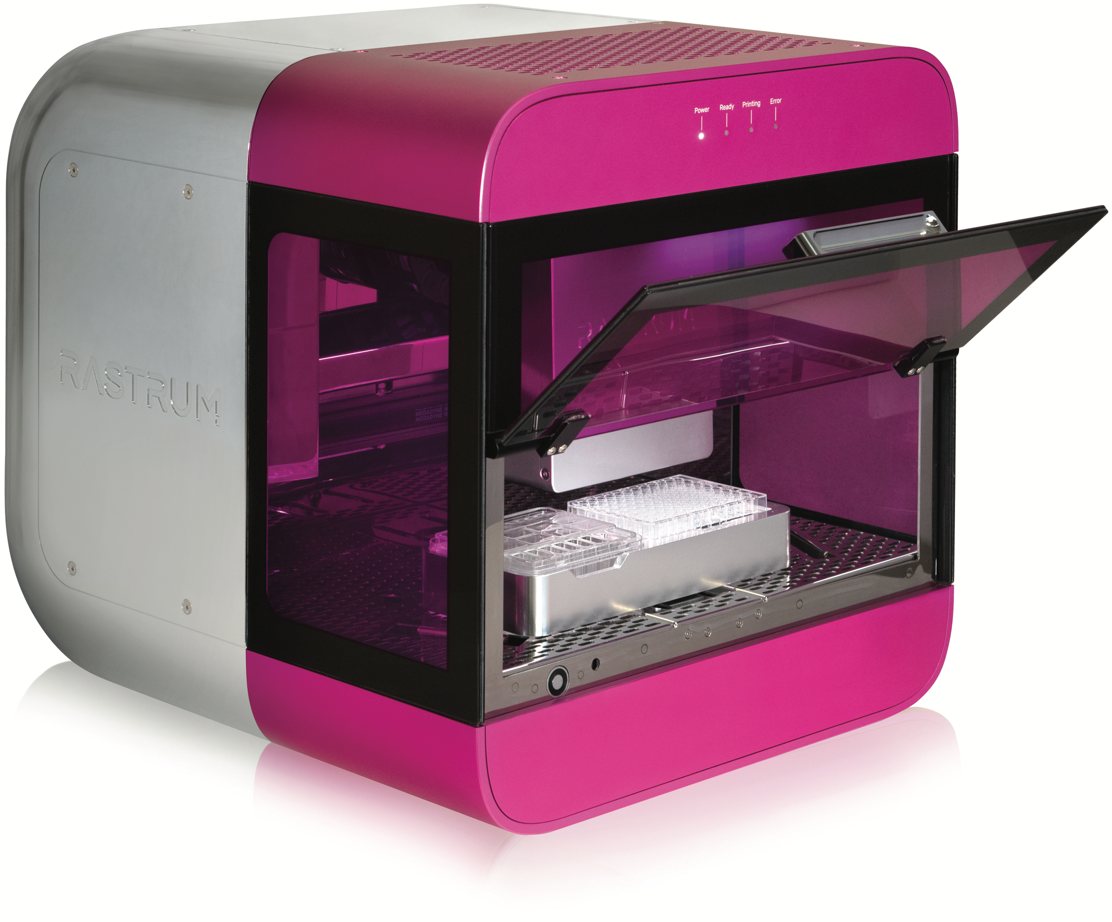 Biomedical researchers traditionally analyse cell behaviour in 2D replicas, such as cells growing in a petri dish. This is not entirely representative of how cells exist in our bodies in real life, however. Cell cultures exist in 3D in the body, not 2D. At Inventia Life Science, we have developed the Rastrum 3D Bioprinter: a 3D printer for living cells. This work is driven by the needs of biomedical researchers and tissue engineers, so that they can analyse, for example, cancer tumours in 3D, and test how they respond to different medicines/treatments. I work to improve the firmware and test procedures of the bioprinter, and develop novel applications for the printhead in clinical devices.

Learning-by-teaching has been shown to help children with learning difficulties catch back up to their peers in a range of areas. At the CHILI lab at EPFL we were interested in exploring the applications of learning-by-teaching to handwriting education. The only problem is, who can a child teach if they are the lowest in their class? We developed a robotic learning partner that can be programmed to be bad at writing so that children can play the role of the teacher, giving it corrections so that its writing improved. I developed the novel handwriting learning algorithm and simulated robotic writing system and, with the help of Séverin Lemaignan, conducted field trials with 45 children aged 6-8.

Best video award at the AAAI Conference on Artifical Intelligence 2015. Humanoids such as the Nao have been shown to be able to write, but are limited by their restricted mobility. Meanwhile, there are various other more expensive robots which are capable of writing well, but are not necessarily appropriate for human-robot interactions. At EPFL we needed both: a robot suitable for interacting with children (the Nao), also capable of writing. By adding the additional component of a syncronised tablet, I was able to create a system for simulated robotic handwriting that is not just cheaper but also more appropriate for interaction purposes than expensive robots that can write well. The synchronised tablet displays writing which matches the robot's movements, fooling even adults.

The Recurse Center is like a writers' retreat for programmers. I took advantage of the great opportunity for collaboration to learn Haskell with/from others, and also the contribute to some C++ libraries that I've used in the past.

Healthcare workers in under-resourced settings commonly do not have time to accurate calculate the respiratory rate of patients, if at all. At the University of Melbourne we developed, with the help of Jim Black who has worked as a physician for a decade in Mozambique, a device to assist with the diagnosis of pneumonia by taking advantage of healthcare workers' Java-enabled phones. I worked on the peripheral electronics and USB communication between devices.

As part of TED's Worldwide Talent Search I presented the work as a finalist for TED2013.

A brain-computer interface to control the automotive experience simulator at CARRS-Q (used for road safety research). The EEG equipment detects unconsciously-generated visually-evoked potentials when users look at lights flashing at different frequencies, and controls the simulator according to what the lights represent (steering, acceleration, e.g.). My work partner and I designed and implementated the electronics, signal processing, and networking.

A library that can convert any surface into a multi-touch interface using an RGB-D camera. The library provides tools for detecting hands, fingertips and gestures to use them for generating mouse and keyboard events, amongst others. For doing so, the library implements image processing algorithms such as: statistical noise cancellation, Kalman filtering, homography transformations, Fourier descriptors, robust centroid estimation. These algorithms were implemented using OpenCV and Boost libraries. 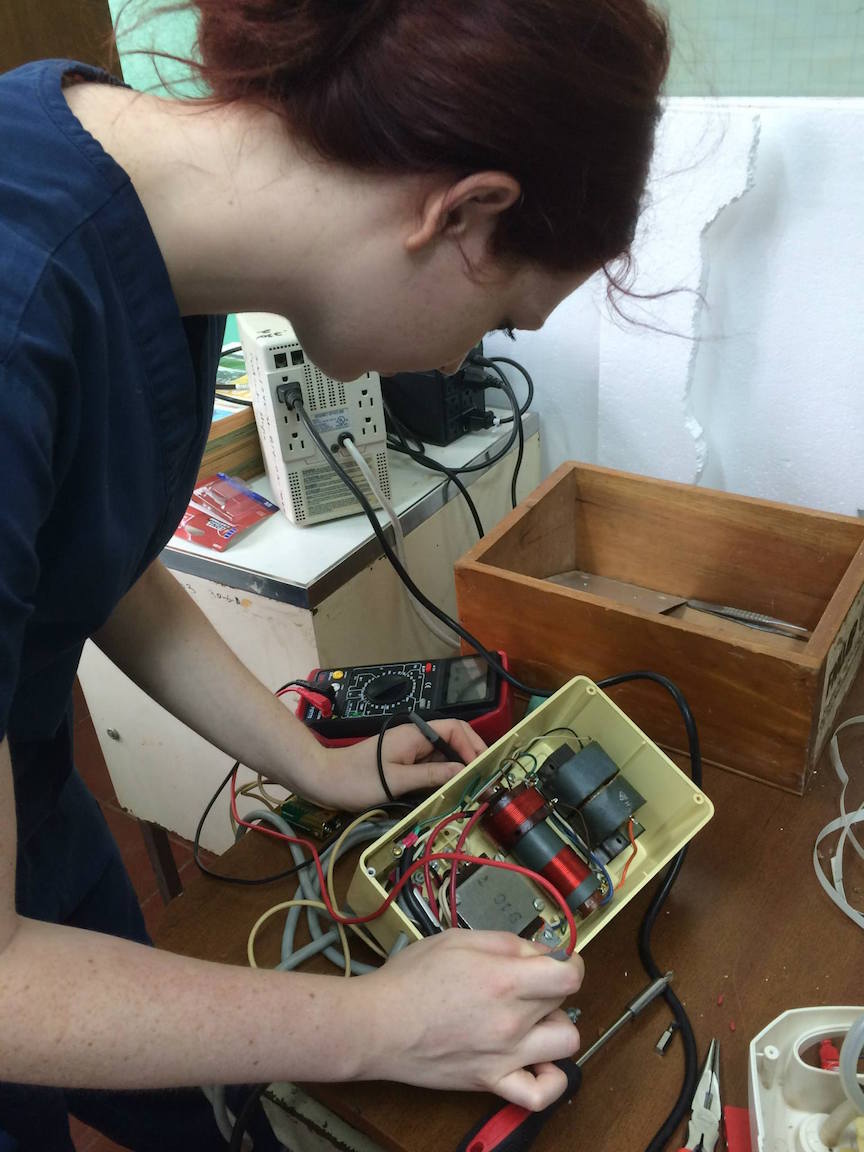 Two months repairing medical equipment in rural Nicaragua, in Spanish. My work partner and I visited 3 health centres and the regional laboratory in addition to our assigned hospital in Juigalpa, due to the relationship we established with the local Ministry of Health office. We were able to put more than 40 pieces of equipment back into service, the majority of which laboratory equipment (sterilisation ovens and centrifuges, for example). 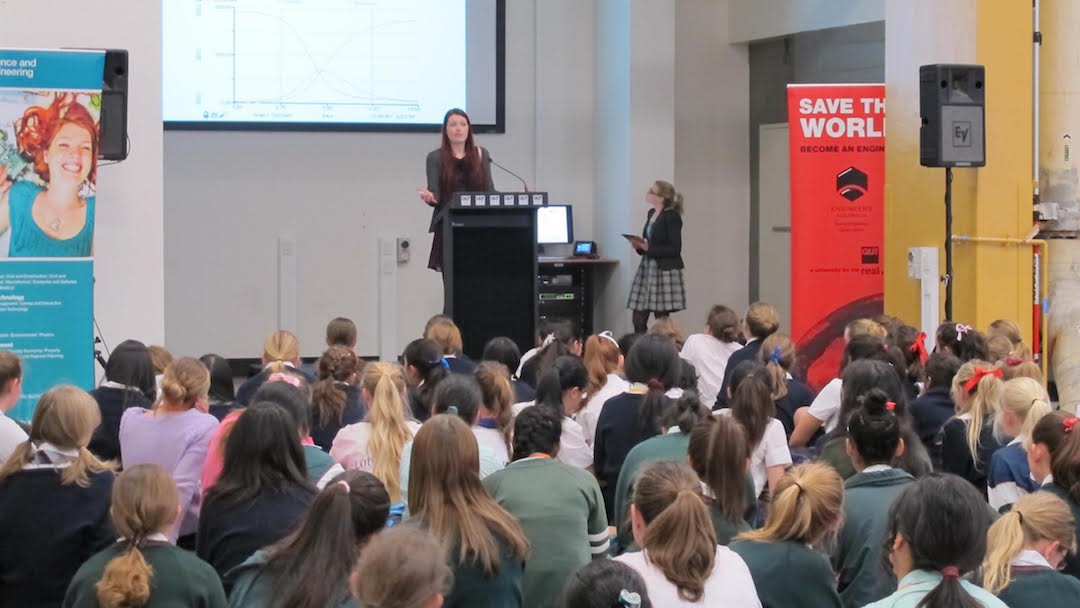 Speaking about the potential for technology to advance society has long been a hobby of mine, in an attempt to improve society's perception of science and engineering careers. My passion comes partly from the fact that this is something that, personally, I did not realise myself until I was well into my own engineering degree. In addition to taking part in formal school outreach programs and science/robotics competitions, I have also been an invited speaker at a range of events with young adults as the audience, such as high school graduations, panels, university Open Days, and Engineering Week events.
In 2012 as the manager of the Robogals Rural and Regional program, I hosted a training weekend for female university students from across Australia to act as ambassadors for engineering. In the following months these ambassadors went on to give presentations to more than 500 school students in remote areas, making an impact far larger than I could alone. 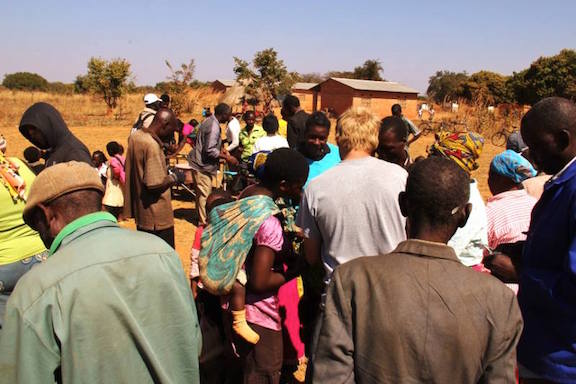 As participants at the MIT-founded IDDS in Zambia, my team worked with the community members of Chitambala Village, Mumbwa to identify the need for food dehydrating processes that were more sophisticated than the existing methods in place for drying vegetables. The area had an abundance of fruit going to waste each rainy season that we discovered could be preserved for consumption in the dry season to improve children's nutrition. We gained experience working with culturally diverse and multi-disciplinary teams, local creative capacity building, developing prototypes and business models, and collecting feedback from community members.

As the highest fundraiser for One Girl's inaugural Do It In A Dress campaign in 2011, I was able to raise more than US$4,000 for the education charity. To date, through sponsorship assisted by various events and media coverage, 22 high school scholarships in total for girls in Sierra Leone have been funded. Furthermore, I have inspired student groups at QUT to participate in the campaign, funding more than 50 scholarships in 2015 alone. This spring, TED headed on the road, visiting 14 cities across six continents on the hunt for untapped talent. The idea behind the sweeping search: to let you, the TED community, weigh in and ... Young women coding their way to the top of Australia's tech industry: Deanna Hood is talking to ... ALSO LOOK IT'S @Deanna_Hood ON A @QUT BILLBOARD IN ANNERLEY :o When was it that Deanna’s future looked set for great things? The day she graduated as valedictorian of her high school two weeks after turning 15? Was it when she finished her QUT double degree ... An ambitious young engineer on a journey to improve the lives of thousands. Deanna Hood combines electronic engineering and robotics to create medical applications (and a brain-controlled car). Some light bedtime reading for the 10yo :/ @QUT @QUTSciEng #theygrowupsofast SMART-WIRED: Could a small humanoid robot somehow help students improve their handwriting? According to engineer Deanna Hood, the ... Female ambassadors for engineering have volunteered their time to visit more than 3,000 female students from over 65 schools across regional and rural areas of ... It’s not very often that you see a grown adult walking around with a school dress on. Last month we asked you to put on a school dress and you got up to all s Drive a car with your thoughts? Slide to 3.29 to watch #QUT's Deanna Hood in @CARRS_Q's driving simulator bit.ly/MkVR68 #roadsafety

Weekend Mornings with Chris Adams on News Talk 4BC

Girls Can Do Anything is a new website designed to inform and encourage female students to take on careers in male-dominated industries. Developed by national women’s alliance Economic Secur ...